X-rays and CT of King Tut

In an effort to solve the mystery death of the most famous ancient Egyptian king, scientists have both x-rayed and CT-scanned the 3,000-year-old mummy of “King Tut”.

Tutankhamun was about 18 or 19 when his reign was cut short by his death in 1323 B.C.  and modern scientist have been trying to figure out how it happened through radiology.

In 1968 an x-ray of Tutankhamun’s head revealed a bone fragment in his skull. Ever since, theories have stated that a blow to the noggin had killed the boy king. The mummy was then X-rayed again in 1978 and the theory was starting to take on a few distractors.

The break could also be explained by a fall or a mishap during mummification, or even from the x-ray procedure itself. But recent CT scans shed some new light on the mystery.

The original plan to transport the fragile mummy to Cairo for and scan it there was canceled due to public protest. So scientists lifted the incredibly fragile mummy still in its box and placed it into a van outfitted with a CT (or CAT) scanner.

1,700 cross-sectional images were taken over a 15 minute period.  As soon as the scanning was completed, the resulting images immediately revealed an important find: His skull was intact, putting to rest for some that a blow to the back of his head was what killed him.  So what did?

According to Egyptian radiologists now, many believe King Tutankhamun's death was caused by a badly broken and infected leg.

CT images of the left knee showing a peculiar fracture of the lower part of the thigh bone with the dense embalming material covering its edges (shown with arrow) suggesting its occurrence shortly before death.

There was no evidence of violent premortum trauma to the skull," says Ashraf Selim, from the Cairo University in Egypt. "But there is a possible femoral fracture that may have led to his death".

Although the break itself was not life-threatening, it would have left an open wound which could have become lethally infected.

In fact, the new CT images revealed no evidence of a skull fracture, and scientists believe the loose bone pieces in the skull, from the x-ray in 1968, originated from a mishap during mummification whichbroke off parts of the first vertebra. The Tutankhamun CT scan was the first step in a five-year endeavor to scan and preserve the ancient mummies of Egypt, many of which are crumbling.

The scientists apparently did not escape the curse that is said to put upon anyone who disturbs the remains of King Tut. While performing the CT scan of King Tut, we had several strange occurrences," Selim said. "The electricity suddenly went out, the CT scanner could not be started and a team member became ill. If we weren't scientists, we might have become believers in the Curse of the Pharaohs."

X-ray showing the courses of hardened resin as a white, opaque mass at the back and top of the cranial vault. source


SAEDI PRESS / AP PHOTO
Zahi Hawass, the head of the Egyptian Supreme Council for Antiquities, left, stands alongside the 3,300-year-old mummy of King Tutankhamun in this 2005 file photo. A CT scan on King Tut's mummy indicated he was not murdered, but may have suffered a badly broken leg shortly before his death. source 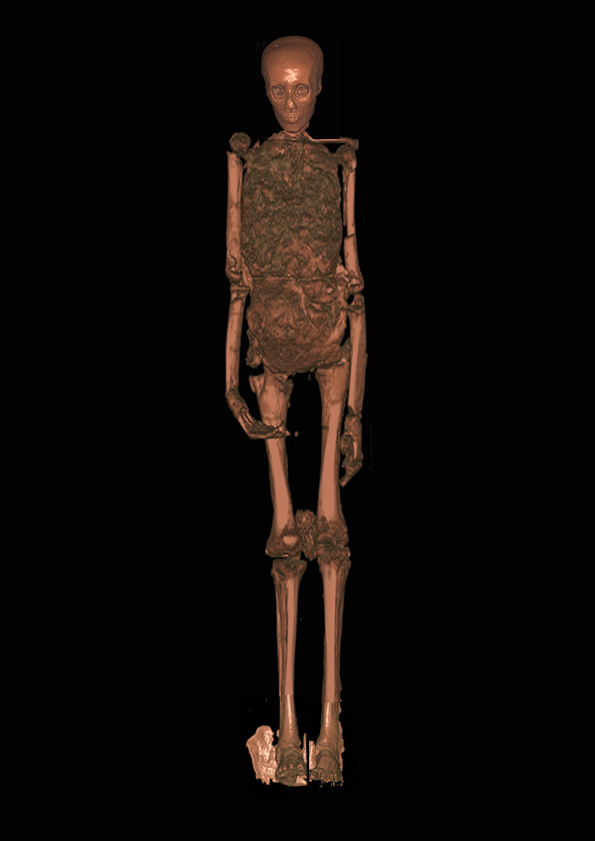 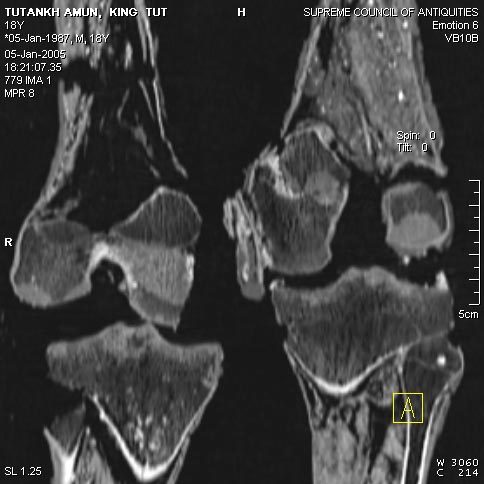 Details of the king’s distal left femur. The arrow in the image at left points to the site of the fracture. source