Two views of daredevil Evel Knievel's many, many injuries.

Evel Knievel: Survivor Of Most Broken Bones In A Lifetime.

However, Evel Knievel's fame as a motorcycle daredevil has come at a terrible price: multiple fractures of almost every one of his bones over his career.

Knievel suffered through 14 open-reduction surgeries to repair or replace an incredible total of his various bones. Manby were fastened together with steel screws, pins or rods as shown in his shoulder x-ray below.

Over his entire motorcycle-jumping career, he spent over 36 months in a hospital due to injuries from his events. In his own words, early on Knievel was quoted as saying, “There are a lot of myths about my injuries. They say I have broken every bone in my body. Not true. I have broken 35 bones.”

While Evel Knievel never actually broke "every bone in his body," ultimately, the 433 broken bones he suffered during his career earned an entry in the Guinness Book of World Records as the survivor of "most bones broken in a lifetime.

“I did everything by the seat of my pants,” Knievel would later say. “That’s why I got hurt so much.”

In his career heyday, Knievel's nationally televised motorcycle jumps were four of the twenty most-watched ABC's Wide World of Sports events to date. 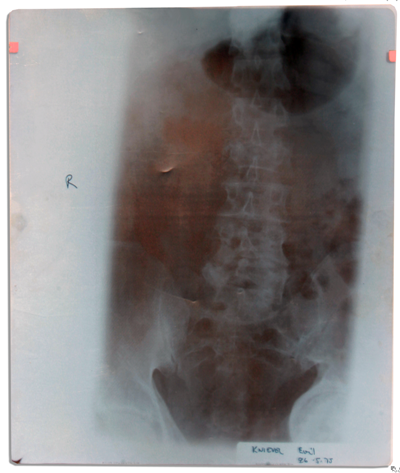