During a 2015 show in Gothenburg, Sweden, Dave Grohl took quite the fall, dropping nearly 12 feet off stage resulting in a dislocated ankle and a broken leg. As he did not want to disappoint the thousands of fans that showed up to watch him play, he requested that he continue to play, but was told he needed a cast put on immediately. Once medics set his leg, he was able to finish the show.

After the show, he was sent to the hospital immediately where he got X-rays of his leg, which he shared with his followers on Twitter.

The X-rays showed his dislocated ankle as well as a snapped fibula. The clear break in his leg shown was quite alarming.

As the injury was more severe than thought, Grohl was told he would have to undergo surgery in order to fix the break. After an MRI and a few more X-rays he set a date for the operation, which Grohl reported as having went well. It consisted of having six metal screws placed in his leg and being told to lay low for a bit. 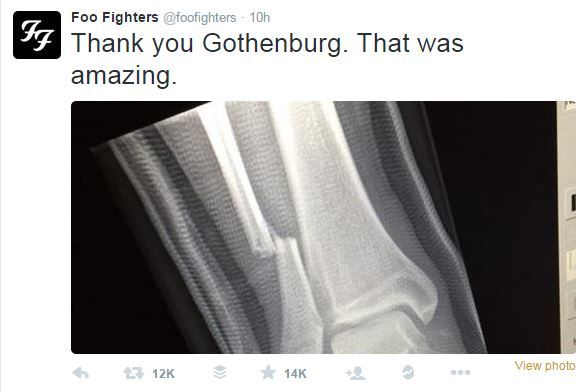 Video of Dave Grohl after breaking his leg during show in Gothenburg, Sweden